We have always wanted the July sock model to be adorned with circular shapes, mainly because we have not seen a spotty, dotty or even circley pattern for a long time.

We were slightly surprised to learn that the lower part of the body does not pair well with circles and spots: Walking or running in circles is not a compliment to our organisational skills. A certain body part, if spotted, is only pleasing to the senses as a dessert dish, rather than its literal version. Toad-in-the-hole, ditto. So, are we putting the phonetical “O” in faux pas when we offer your lower extremities some circle-strewn socks? Before you say yes, please hear out my counterarguments.

The bad rep of walking or running in circles is completely unjustified. We all walk the same round Earth. Would we accuse Willy Fog or Ferdinand Magellan of unnecessary going-around-in-circles on their travels? Surely not, even if Magellan actually only managed a slightly protruded semicircle. He sadly died in the Philippines, not from the scurvy (vitamin C deficiency) dreaded by sailors but from the spear of an indigenous man.

Another vitamin deficit, this time in the D category, is likely to blame for bow-leggedness, another “circular” O-shaped ailment of the lower extremities often caused by genetics, sports or malnutrition. In light of these potential vitamin deficiencies, the aforementioned dishes suddenly seem more like a tasty refreshment on a summer day, which surely overpowers their less palatable denotations.

Around eighty percent of the sock is based on cotton wool in different shades of yellow and dark blue. A further ten percent of polyamide fibre, which makes up the turquoise and red semicircles.

The “skeleton” of the sock contains five percent Lycra and five percent polypropylene. The latter ingredient ensures high tensile strength, while the former contributes with greater elasticity and antibacterial protection.

All socks from Ponožkovice are designed and manufactured in the Czech Republic. 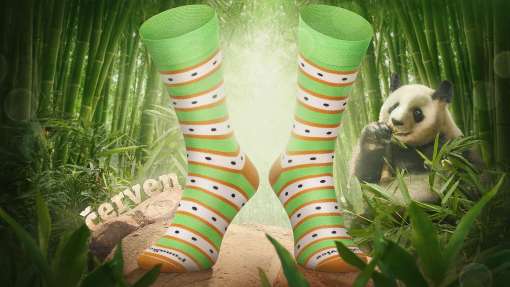