Telling you that the circles and rings on this sock design represent the new year would be too easy. Granted, our favorite planet circling the Sun yet again is indeed an important event to commemorate.

Technically, though, the Earth’s path around the Sun is not a circle but an ellipse. That statement in itself is a simplification too, though, since our entire solar system whizzes through the galaxy at about 800 000 kph. To that, we must add the motion of the Milky Way – an entire 2.1 million kph on the speedometer. That is one bumpy ride!

Plus, the entire universe is in motion and expanding. Scientists have been quite sure for several decades that it is doing so at an ever-accelerating rate. The world’s greatest physicists, including Stephen Hawking, never moved a muscle when defending this theory, so it must be true.

So, why are there circles on your socks? Because they look cooler than the unshapely ellipses. It would make no sense for me to wish you a year that has come full spiral, especially since the year 2022 contains the numeral two, the most sacred number in the world of socks, no less than three times. The last time that happened was 800 years ago. We are also a mere 200 years away from the year 2222, in which the numeral two will appear a total of four times.

In conclusion, please let me wish you good health and all the best. This year will by virtue of its numerical composition be amazing, and the best is yet to come.

Laws conceived by human legislative bodies and universally accepted sock ethics mandate that inform you about the material composition of your new socks acquisition. Let us then obligingly reveal our secret recipe. The base is a dark blue cotton yarn, comprising eighty percent of the sock’s volume. The circles and spheres have all been possible by turquoise and yellow polyamide, which makes up ten percent of the sock. The remaining ten percent consist of Lycra and polypropylene. Polypropylene gives the socks a higher tensile strength, while Lycra makes them elastic and provides antibacterial protection.

All socks from Ponožkovice are designed and manufactured in the Czech Republic. 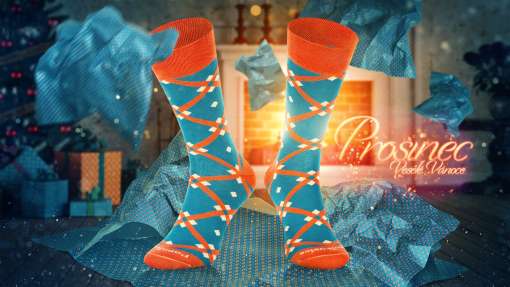